To share your memory on the wall of Derek Dawson, sign in using one of the following options:

Derek was a very loving and devoted father to two beautiful children, Grace Ann and Emmett Alan Dawson. We see so much of Derek in his children, especially his stubbornness and heart of gold. He didn’t know it but we often referred to him as a helicopter Dad. He hovered a lot because he loved them dearly. May he live on forever in his precious children.

Derek was always the guy you could call whenever you were in trouble. No matter what he was doing he would be there to help. He always put others first. Derek had the most contagious belly laugh that could put a smile on your face even in the worst of times. He was most proud of his beard, often allowing only his niece and daughter to comb it for him. Derek was a teaser, which he came by naturally.

Derek had a love for animals and the outdoors, but most importantly his dog Dexter. Dexter was his pal, his buddy and never left his side.

Derek is survived by his parents Dwight and Carol of Howland, his children Grace and Emmett Dawson and their mother Candice. Three sisters Rachael Hallett of Orland, Sarah Jackson and Josh of Bucksport, and Ashley Dawson and James of Howland. Nieces and nephews; Tyler, Kaylee, Sophie, Ryan, Jace, Addyson and Camden. He also had many cousins that were like siblings to him and close friends Dylan, Aaron and Jeff.

The Family will be holding a celebration of life “Derek style” in the spring. Gifts in memory of Derek may be sent to the Travis Mills Foundation, 1002 Watson Pond Rd, Rome, ME 04963.
Read Less

To plant a memorial tree in honor of Derek A. Dawson, please visit our Heartfelt Sympathies Store.

Receive notifications about information and event scheduling for Derek

Print
Services will be held at a later date

We encourage you to share your most beloved memories of Derek here, so that the family and other loved ones can always see it. You can upload cherished photographs, or share your favorite stories, and can even comment on those shared by others.

Posted Dec 18, 2020 at 12:53am
Carol & Dwight---
There truly are no words to express our heartfelt condolences at your loss of Derek.
Everything depicts him as a great person that truly will be missed by many.
Prayers of comfort and support are offered up...and thru your faith you know you will see him again.
With deepest sympathy...
Randi & Bernice.
Comment Share
Share via:
LO

Posted Dec 17, 2020 at 09:57am
We will always remember Derek's wonderful smile and laugh helping us feel so welcome at Thanksgiving gatherings. Earth's loss is heaven's gain. May you all be comforted by the outpouring of love during this deeply sorrowful time.
Blessings and Peace -
Comment Share
Share via:
LO

Posted Dec 17, 2020 at 09:47am
Wishing you loving memories to sustain you during this time of tragic loss. Keeping Derek and all who love him in our thoughts and prayers.

Posted Dec 15, 2020 at 07:20pm
We have many good memories of Derek, he truly was a joy to have around. Many have mentioned his belly laugh, So true... It could be heard no matter where he was in our house. Our prayers are with his family as they go through this horrible time. Kenton and Lorna Drost
Comment Share
Share via:
DG

Please know our thoughts and prayers are with you. There are no words to express our sorrow for your loss. We have many fond memories of Derek when he was very little, throughout his teen years.
Comment Share
Share via: 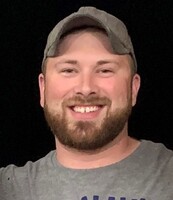