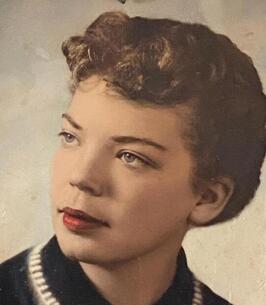 Lincoln – Nancy Bell (Linton) Michaud, 88, wife of the late Walter C. Michaud, peacefully went to be with the Lord on Monday, June 13, 2022, with her daughters by her side. She was born November 2, 1933, in Lincoln, the daughter of William H. and Leona M. (Bell) Linton.

Nancy grew up in Lincoln, and was a graduate of MCI in Pittsfield, class of 1952. She attended college in Connecticut and worked as an administrative assistant there for a period until she returned to Maine in 1956, following the death of her brother. Nancy met her love, Walter, in 1959, and they settled in Lincoln Center after marrying, where they raised their family of four beautiful daughters. Nancy stayed busy as a homemaker until 1977 when she started driving a school bus for MSAD 67. She loved being a bus driver, and soon became “everyone’s favorite bus driver”, but really became more of a friend to her passengers, many of whom still refer to her as their favorite. Nancy became Transportation Supervisor the school district and served in that capacity until her retirement in 1997. During this same time, Nancy, who loved animals, was a dedicated volunteer to the Penobscot Valley Humane Society and was instrumental in the construction of the new building that is still home to the organization. In 1984 she returned to Eastern Maine Community College to pursue her nursing career. When she wasn’t working, Nancy was an avid reader, and loved spending time with her family, especially at her camp on Cold Stream Pond, where she partook in some of her vices.

The family would like to extend a special thank you to the remarkable and compassionate staff at the Penobscot Valley Hospital Emergency Department, specifically Dr. Fallon, for the kindnesses and courtesies extended to Nancy’s family and their “Mum”.

Friends are invited to visit with the family 5-7 PM Thursday, June 23 at the Lamson Funeral Home, Clay Chapel, 7 Lee Road, Lincoln. A Mass of Christian Burial will be celebrated 11 AM Friday, June 24 at Our Lady of the Eucharistic Parish, St. Mary of Lourdes Catholic Church, Lincoln with the Rev. Tony Chinnaiya pastor, presider. Interment will be at the Town Line Cemetery, Enfield. Services will be livestreamed and may be viewed, and messages of condolence expressed, at Nancy’s Book of Memories at www.lamsonfh.com.