To share your memory on the wall of John Rush, sign in using one of the following options:

Receive notifications about information and event scheduling for John

We encourage you to share your most beloved memories of John here, so that the family and other loved ones can always see it. You can upload cherished photographs, or share your favorite stories, and can even comment on those shared by others.

Plant a Tree in Memory of John
Plant a tree
1 tree has been planted in memory of John W. Rush
GM

Posted Apr 29, 2021 at 07:02am
Lynn and family.
I can never remember a time in my life when I did not know John. Starting early at St. Martin's school, we were friends. I remember in the first grade, age 6 that John and I picked up some of the "helicopter" whirly gigs that fall out of maple trees. We opened them, stuck them on our nose and covered with our hands. Of course the teacher caught us as everyone was laughing and she made us stand in front of the class with them stuck on our noses. We took it like men. (we were happy it wasn't Mother Saint Lucia who caught us!) Then we started making colored water at his house by soaking colored paper in the water and putting it in jars with lids. We thought we had an invention or something to sell for sure. I will forever remember the thundering, cheerful greeting of "gorgeous george" as he would say when we met. I am sorry for your loss and pray the God (Jesus) will heal your hearts into fond memories of your lives you all shared with John.
Comment Share
Share via:
DM

Thank you for your thoughtfulness ❤️

Posted Apr 27, 2021 at 04:43pm
Dear Lynn and family, I was sorry sorry to hear of John’s passing. He was a truly great guy and is going to be missed so many. My love and prayers, Sharon L. Hallett
Comment Share
Share via:
PM

Posted Apr 26, 2021 at 06:32pm
So sorry to hear of John's passing. He was a wonderful & caring man. Our deepest condolences to his family.
Comment Share
Share via:
GN

Posted Apr 26, 2021 at 03:37pm
My deepest heartfelt sympathies to John's family. I've known Johnny since he was a young boy, being one of us kids who scrambled up and down "the hill path" connecting East Terrace to Penobscot Avenue. We'd play basketball in the driveway, softball in the field, and football on the lawn...a sport for all seasons when all the neighborhood kids (104 at last count) would get together and have a great time. Later on, when I moved to Elm Street in Millinocket, Johnny was always there with a huge backhoe to be sure I didn't get snowed in by the town plow...always with a laugh, saying, 'Don't tell anyone I'm doing this!' We shared a lot of good times over the years and a lot of laughs as well as sorrows. A better man will be hard to find. A true gentleman and a true friend. Johnny, you are gone far too soon. You have impacted a whole community with your kindness and wonderful personality and we will miss you. Rest in peace, Johnny. Till we meet again. Always a friend, Gaile
Comment Share
Share via: 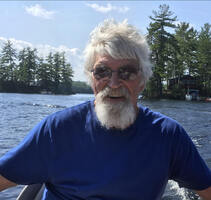