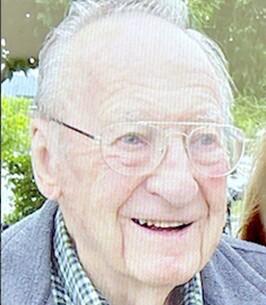 Springfield -Hazen Austin Moores died peacefully on July 12, 2022 in Waterville, Maine at the age of 96. Born at home in Springfield, Maine on June 8, 1926, the son of the late Austin and Dorothy (Osgood) Moores.
Hazen attended schools in Springfield graduating from Lee Academy. Upon graduation from highschool he served his country in the army from 1944 to 1946. He then attended the University of Maine Orono earning a BS Degree in 1950. He married the love of his life, Joan (Cote) Moores, by following her to New York and bringing her back to Maine in August 1950. They made their home in Newport where Hazen taught biology at Newport High School and coached baseball and basketball. He took his basketball teams to the LL Basketball tournaments before there was a Bangor Auditorium. Hazen remained very good friends with all his former ball players including Goody Gilman whose annual reunion he seldom missed. He spent a couple of summers at UMO getting his Master’s Degree in Educational Administration and became the principal of Newport High School. Hazen later moved his family to Presque Isle where he served as principal, and then ended his educational career as headmaster at his alma mater, Lee Academy. During his years in education, Hazen was well-respected in each community he lived. He was president of the Maine Principals’ Association, a member of the Presque Isle Rotary Club, and made a Paul Harris Fellow by the Lincoln Rotary Club. As president of the MPA Hazen provided leadership to high school principals throughout the State of Maine. Hazen retired to his family homestead in Springfield, Maine and spent a lot of his time in his vegetable gardens, on his skidder or hunting and fishing. He spent his retirement years traveling with family and friends. Hazen and Joan traveled around the world with good friends Bobby and Joyce Cobb Thompson. He spent countless hours arguing and laughing with his close friend and cousin, the late Lowell Osgood. Hazen was a great host at his family reunions and was famous for his bean hole beans. He was also an avid reader.
Hazen is survived by his two children; daughter Suanne and husband Steven Giorgetti of Naples, Florida and son Brett Moores of Springfield Maine; 7 grandchildren, Joanne Giorgetti and her husband Tobyn DeYoung of St. Petersburg FL, Julie and her husband Kris Larouche of Fairfield, Jessica Giorgetti and her partner James Dana of Hampden, Morgan Moores of Phippsburg, Emily and her husband Shon Theriault of Augusta, Adrienne and her husband Eban Lovejoy of Belgrade and Will Moores and his wife Sarah Varney of Turner; 9 great grandchildren, Steven Centeno and his fiancée Shira Ferman, Maranda and Caroline Centeno of St Petersburg Fl, Tyler, Macie, and Kristian Larouche of Fairfield, Alexis and Abigail Scott of Hampden, and Hazen Lovejoy of Belgrade; niece Nancy Smith of Machias and nephew Ronald Sellars of PA. ; as well as many great nephews and nieces. Hazen was often referred to as “my favorite uncle, the best gramps ever, a wonderful dad and husband Haz.” He was loved adored by all.
Hazen was predeceased by his beloved wife Joan (Cote) Moores; sister, Muriel Sellars, brother-in-law Lawrence Sellers; nephew Larry Sellars.
Friends are invited to visit with the family 6-8 PM Friday, July 29 at the Lamson Funeral Home, Clay Chapel, 7 Lee Road, Lincoln, where funeral services will be held 10 AM Saturday, July 30. Interment, with military honors, will be at the Moores-Lowell Cemetery in Carroll Plantation. Services will be livestreamed and may be viewed, and messages of condolence expressed, at Hazen’s Book of Memories at www.lamsonfh.com.