To share your memory on the wall of Frederick King, sign in using one of the following options:

Print
East Millinocket - On Monday, January 18, 2021 Frederick “Papa” King Jr. passed away peacefully in his home, surrounded by his family. Freddie was born on September 16, 1938 in East Millinocket to Winona Labby and Frederick King Sr. and Fred and ... Read More
East Millinocket - On Monday, January 18, 2021 Frederick “Papa” King Jr. passed away peacefully in his home, surrounded by his family. Freddie was born on September 16, 1938 in East Millinocket to Winona Labby and Frederick King Sr. and Fred and Laura Fortine. As soon as he turned 18, Freddie joined great northern Paper Co. in East Millinocket. Soon after being hired, he wanted something more. On December 27, 1956, he proudly joined the U.S. Navy and after 9 weeks of boot camp served on the USS Fessenden DER 142, destroyer escort raider ship and then the USS Arcadia AD23, destroyer repair ship. After 4 years of active duty Freddie returned to East Millinocket where he reclaimed his position at the mill and spent two more years in the U.S. Naval Reserves.
He met the love of his life, Mary Ellen “Meme” Springer of Sherman while riding the train to Bangor. It
was love at first sight. His Navy pals overseas heard of the wonderful news and pooled their money
together to help Papa buy Meme’s engagement ring. They married September 5, 1959 and raised their
three children, Brenda, Freddie, and Nancy and then later planted roots in East Millinocket.
Despite working long shifts at the mill to provide for his family he wanted to give them more. In 1971 he
started building the well-known “King Family Camp” on North Twin Lake. The King Clan would hike in
carrying coolers, gear, and tools, to tent on their own lot. Papa, Meme and the kids worked on the camp
every chance they had. Every log used to build the camp was hand cut by Papa and his kids would strip
the bark. After about a year of hard work the camp was finished. It was a source of great pride and he
enjoyed spending all his free time there with family and friends. So many hotdogs, open fire toasted
marshmallows and bean hole beans were enjoyed by all there!
In 1994, Freddie retired from the mill. It was not long after he donated a kidney to his only son, whose
kidneys started failing due to a hereditary disease, Al Ports syndrome. After recovering, Freddie, not one
to sit still, could not settle into retirement and was hired on with Northeast Construction where he
worked for a few more years. He really enjoyed staying busy, his “work sneakers” could tell you. He
wore them out.
He was not all work and no play though. When he was not working, he enjoyed hunting and fishing,
finding peace in the wilderness, no matter the activity. He built a hunting camp, hauling all the wood
and supplies over the ice to be able to complete it. He spent many days/nights there with friends and
family making many fond memories to talk about for years to come.
Papa was truly the anchor of his family, always there to lend a listening ear and shoulder to cry on or to
give advice. He knew instinctively whether kind words or tough love was necessary. However, when it
came to organization, his skills were top notch, and he was ready to tell you exactly why.
Left to cherish his legacy is his wife of 61 years, Mary Ellen, whom he devoted his life to. His daughters;
Brenda King of Old Town and Nancy Small and her husband Shannon of East Millinocket. His
grandchildren; Casey Fitzgerald of Old Town, Billie-Jo Arellano and husband Mario of Fort Lee, VA,
Jessica Birmingham and husband Allen of Medway, Jodi and husband Bobby Jandreau Jr. of Millinocket,
Nekia Small and husband Aaron of Medway, Freddie King IV and finance Amanda of East Millinocket, and
Kristen Quill of Old Town. Great grandchildren whom he thought the world of and could be a kid again
with, Alyssa Marie, Anderson, Anthony Mauricio, Amelia, Alyssa Nichole, Lucas, Anthony William, Bentley, Nicholas, Trevor, and Jaxon. His brother; Ronald King Sr. and wife Rose of California. Many
nieces and nephews that also held a special place in his heart.
Freddie was pre-deceased by his parents and his only son, who passed at the age of 44 Frederick King III.
Graveside services will be held in the springtime at the East Millinocket Cemetery. Arrangements are by Lamson Funeral Home, East Millinocket.
Read Less

To plant a memorial tree in honor of Frederick King, please visit our Heartfelt Sympathies Store.

Receive notifications about information and event scheduling for Frederick

There are no events scheduled. You can still show your support by sending flowers directly to the family, or planting a memorial tree in memory of Frederick King.
Plant a Tree

We encourage you to share your most beloved memories of Frederick here, so that the family and other loved ones can always see it. You can upload cherished photographs, or share your favorite stories, and can even comment on those shared by others.

Posted Jan 27, 2021 at 01:12am
So sorry for your loss. He was a great man and will be truly missed by all who knew him. Our hearts and prayers go out to all of the family. 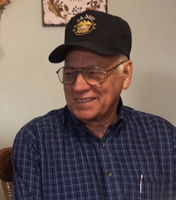