To share your memory on the wall of Carroll King, sign in using one of the following options:

He attended schools in West Enfield and Howland. Carroll was drafted into the Army d... Read More
West Enfield – Carroll D. King passed away on Sunday, February 21, 2021. He was born May 26, 1927 in Prentiss, the son of Clayton and Thelma King.

He attended schools in West Enfield and Howland. Carroll was drafted into the Army during World War II. He was a member of the Masonic Lodge in Milo and the Anah Shrine. After his time in the Army, Carroll and his brother Phillip started King Brothers Trucking. He spent several winters in Florida and summers at their camp at Cold Stream Pond.

The family would like to extend a special thank you to Kevin Olsen and special care of the Hospice of Community Health and Counseling.

Friends are invited to visit with the family 2-4 PM Wednesday, February 24, 2021 at the Lamson Funeral Home, Clay Chapel, 7 Lee Road, Lincoln. Graveside services will be held in the spring at the West Enfield Cemetery.
Read Less

Receive notifications about information and event scheduling for Carroll

We encourage you to share your most beloved memories of Carroll here, so that the family and other loved ones can always see it. You can upload cherished photographs, or share your favorite stories, and can even comment on those shared by others. 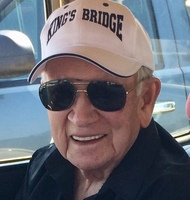