To share your memory on the wall of Albion Kelley, sign in using one of the following options:

Receive notifications about information and event scheduling for Albion

We encourage you to share your most beloved memories of Albion here, so that the family and other loved ones can always see it. You can upload cherished photographs, or share your favorite stories, and can even comment on those shared by others.

Posted May 01, 2021 at 09:16am
Dear Dan and Julie, We are so sorry for the loss of your father. Our thoughts and prayers are with you all at this sad time. Spencer and Nancy Brown
Comment Share
Share via:
SM

Posted Apr 29, 2021 at 07:40pm
I worked with Al the las t8 or so years of his career. Al was quite a gentleman with a dry sense of humor that kept you on your toes! I am sad to hear of his passing and whish to express my condolences to his family and friends. Best regards, Steve Moore
Comment Share
Share via:
P

Posted Apr 28, 2021 at 06:48pm
Dear Ethel, Nancy, and family,
We are sorry to hear of your loss. Be assured that our thoughts and prayers are with you at this time.
Sincerely,
David and Mary Labun
Comment Share
Share via: 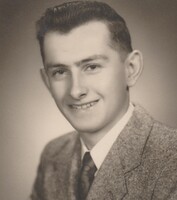